The 18th century game rules in a contemporary guise

Are you tired of classic games after a few weeks of quarantine? Then play a game from the 18th century!

Place the cards in front of you in random order in 3 columns of four cards. Then place your 8 jetons on 8 different cards (max. 1 jeton per card). The distribution of points shows which cards you can win the most jetons with. (the cards in the corners of your rectangle are only worth 1 jeton, the middle cards are worth 3 jetons, the remaining cards are worth 2 jetons). 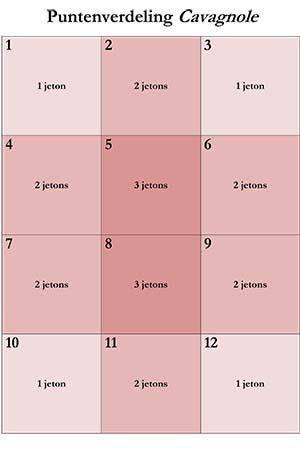 The game leader now draws six numbers from the washcloth, one at a time.

If a player has a jeton on the number drawn, the players to his left and right must give one jeton to that player. If the jeton is on a double or triple, the two neighbours will give the receiving player two or three jetons respectively. Those handing over jetons must take them from their own cards. The person receiving the jetons can put them onto their own empty cards. If the grid is full and there is a jeton on every card, simply place the jetons in front of you. After the sixth number is drawn, the score is calculated.

After each round of six draws, the number of jetons each player has over or below the 8 jetons at the start of the round is recorded.  For example, if a player has 11 jetons after one round, a score of +3 is recorded. If, on the other hand, a player only has 3 jetons left, a score of -5 is recorded. The average score across all players remains zero. What one player loses, another wins.