The Museum Plantin-Moretus belongs to a select group. Should armed conflict break out, it will enjoy enhanced UNESCO protection. Only ten such sites exist in the world.

The Museum Plantin-Moretus is the proud owner of the Blue Shield.

In 2012-2013, the Historic Properties Agency and the Arts and Heritage Agency drew up an application for enhanced UNESCO protection for the Museum Plantin-Moretus. This is in line with the Hague Convention on the Protection of Cultural Property in the Event of Armed Conflict. In 2002, the business archive of the Museum Plantin-Moretus was included in the UNESCO World Heritage List.

Since Belgium’s ratification of the Hague Convention in 2010, a Belgian working group within the Interministerial Commission for Humanitarian Law (CIDH) has been working on monitoring and implementing the convention. In addition to Flanders, applications for enhanced protection were also submitted by the Walloon Region and the Brussels-Capital Region.

In March 2013, three applications were submitted to UNESCO: the Horta Museum for the Brussels-Capital Region, the Spiennes flint mines for the Walloon Region and the Museum Plantin-Moretus for the Flemish Region. Currently there are ten UNESCO World Heritage sites with enhanced protection, three of which are in Belgium. 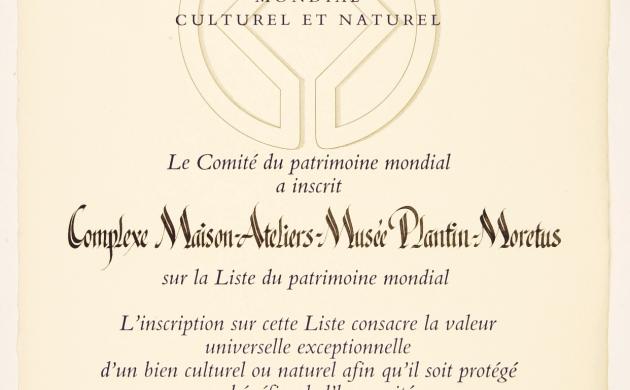 There is just one museum on the UNESCO list. The Museum Plantin-Moretus. That is thanks to its combination of prestigious patrician mansion, centuries-old workshop and – for more than 125 years – outstanding museum. Plus a virtually intact business archive dating back to 1555.