A lost drawing by Rubens returns home after four centuries

The Flemish Government has purchased a long-lost drawing by Peter Paul Rubens for an amount of 307,400 euros. The work will be included in the Masterpieces List and the Plantin-Moretus Museum will receive it on long-term loan.

It concerns a design that Rubens made on behalf of the Moretus family for an illustration in the book 'Opticorum libri sex' by the mathematician and physicist Franciscus Aguilonius. That physics work on optics was published in 1613 by Plantin's publishing house. The purchase of this until recently unknown design by Rubens enriches the heritage preserved in Flanders. It is a 'top piece' that illustrates the often close collaboration between Rubens and the Moretus family. This drawing is an important asset to the Plantin-Moretus Museum's collection. The 'Opticorum libri sex' - or 'Six books on optics' - by the Jesuit Franciscus Aguilonius (1567-1617) was one of the very first publications of the Plantin publishing house to which Rubens cooperated. The book provides an extensive overview of the knowledge of optics at the time. In addition to the title page, Rubens also designed the title vignettes for the six parts of the book. In the recently discovered drawing, a draft for the final tome on projections, a scholar kneels with an armillary — or a celestial globe with metal rings that represent the main circles of the sky. A putto illuminates the globe with a flaming torch. The shadow of the rings on the ground is studied by two other putti. In his book, Aguilonius describes the many possible applications of projections in science and art. After four centuries, this design is now returning home. 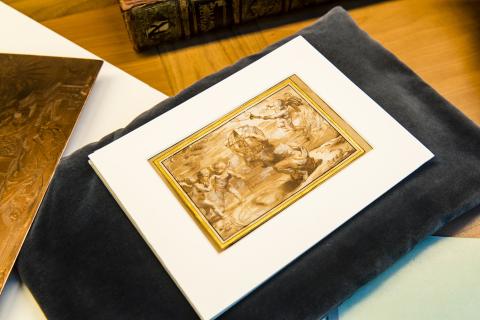 The drawing belonged to the 18th-century private collection of the Marquis of Lagoy, Jean-Baptiste-Florentin-Gabriel de Meryan (1764-1829). Afterwards it remained in the hands of the family, so the design was completely unknown until recently. Scientists suspected it was lost. It is an exceptional event that such an unprecedented drawing by Rubens resurfaces. What is even more special is that from now on she will be admired by a wide audience in a Flemish public institution.

Come and see it with your own eyes

For those who want to see the drawing with their own eyes, the Plantin-Moretus Museum is organizing a show during the weekend of September 25 and 26 and that of October 22, 23 and 24. Every time from 10 a.m. to 4.45 p.m. (on Saturday 25 September only from 1 p.m.). Access to this presentation in the reading room is included in the museum ticket. Tickets can be reserved online in advance. This long-lost drawing will also shine in the exhibition The most beautiful drawings from the time of Bruegel and Rubens in the autumn of 2023. This exhibition shows the 80 most beautiful old drawings from Flemish collections. Together they provide an astonishing overview of who, why and how people drew in our region in the 16th and 17th centuries. For this exhibition project, the Plantin-Moretus Museum recently received a prestigious grant of 81,000 euros from the internationally renowned Getty Foundation, as part of The Paper Project: Prints and Drawings Curatorship in the 21st Century. No fewer than 1,227 prints and drawings from the collection of the Plantin-Moretus Museum have been recognized as Flemish masterpiece to date. With the exhibition 'From crabbing to carton', the Plantin-Moretus Museum places its masterpieces, and those from fellow institutions in Flanders, in the international spotlight. It is a unique opportunity to see some special clappers side by side. 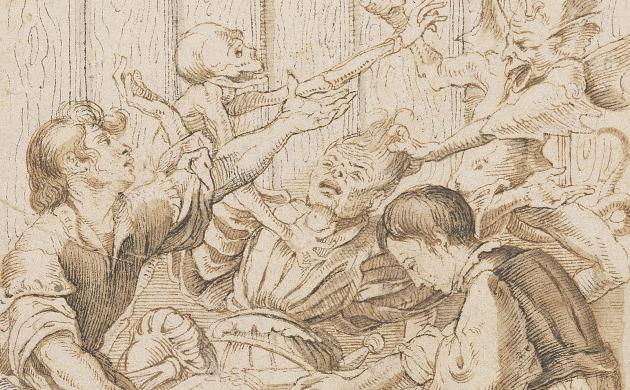 From scribble to cartoon

Drawings from Bruegel to Rubens in Flemish Collections

In this exhibition, the Museum Plantin-Moretus shows the 80 most beautiful old master drawings from Flemish collections. From scribble to cartoon: Drawings from Bruegel to Rubens in Flemish Collections gives an astonishing and representative overview of the art of drawing in our regions in the 16th and 17th centuries.

30.04.2020 | The Flemish Government has placed no less than 194 drawings from the Prints room collection of the Plantin-Moretus Museum on the Masterpiece List. The best of the examples is a sketchbook with 43 drawings made by Peter Paul Rubens when he was 12-13 years old.