From this week onwards, a new work of art can be admired at Museum Plantin-Moretus. In June 2019, the Museum Plantin-Moretus acquired an oil sketch on canvas by an anonymous painter from Aguttes Auction house in France. Following studies by Dr Bert Schepers, senior editor of the Corpus Rubenianum Ludwig Burchard, the work was recently attributed to Antwerp's 17th-century artist, Theodoor Boeyermans. 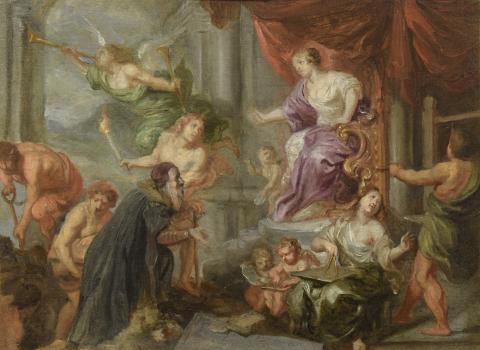 The iconography bears reference to the Plantin-Moretus motto as a printer and publisher: Labore (Hercules on the right, pulling on the press) and Constantia (sat at his feet, holding the compass). It is a glorification of the Officina Plantiniana, the house of Plantin-Moretus. The painter used an allegory, a painting genre that was popular in the 16th and 17th century, featuring Greek or Roman gods to illustrate abstract concepts. In his design, Boeyermans may be emphasising the role of the Moretus family as historic publishers and printers.

An inscription can be seen bottom middle of the painting. The writing is unclear. So its meaning remains a mystery for the time being.

The Flemish baroque painter, Theodoor Boeyermans (°Antwerp 1620 - +Antwerp 1678), was well known to the Moretus family. In an inventory from 1714, following the death of Anna Maria de Neuff (wife of Balthasar III Moretus), there is reference to a painting above the mantelpiece with a mythological scene by Boeyermans, hanging in the second parlour.

It is very likely that Boeyermans was taught by master painter Anthony van Dyck and made classical canvases according to the customs of Peter Paul Rubens. He also painted a large number of altarpieces for Flemish churches, group portraits and allegorical scenes.

Until now, only two of Theodoor Boeyermans' original oil sketches have been traced, one of which belongs to a private Belgian collection: De Marteling van de heilige Laurentius (The Martyrdom of St. Lawrence). The other, Het mystiek huwelijk van de Heilige Catharina (The mystic marriage of St. Catherine), was acquired by the Municipal Museums of Mechelen 10 years ago.

When it was acquired, the painting was in pretty poor shape. Over the years it had been touched up and transferred to a canvas. The frame was a sorry sight. 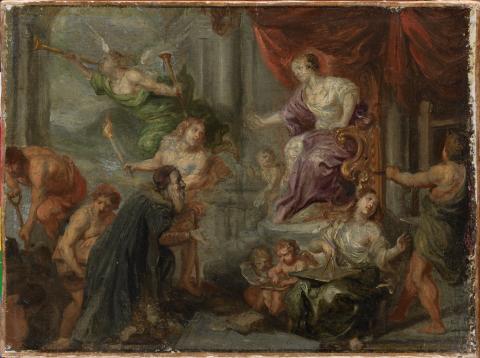 As specialists in painting restoration, the sisters Jill and Ellen Keppens from Bruges set to work on some serious restoration of the oil sketch. Old layers of varnish, retouches and fillings were removed. Gaps and worn parts were filled and retouched. Finally, a new layer of varnish was applied.

The wood restorer, Anton Venhuizen, set to work on the limewood frame.

A permanent place in the exhibition

The acquisition of this oil sketch is an interesting addition to the Museum Plantin-Moretus collection. After all, the work illustrates the glorification of the house of Plantin-Moretus. It is to be put on permanent display at the museum. Given the intimate nature of an oil sketch, Plantin's office is the perfect spot. It was in this humble office that Plantin wrote his letters, took care of his accounts and counted his money. The gold leather wall covering is an indication of Plantin's prosperity.

Each year, the Museum Plantin-Moretus invests a sum of 40,000 euros in the purchase of art and a further 50,000 euros in its conservation and restoration.

Earlier in 2019, the Museum Plantin-Moretus bought four old master drawings from KDArt Antwerp, along with a richly illustrated album amicorum or book of friends dated 1601 and published by Jan Baptist Van Zangrium, at Arenberg Auctions.