Reconstruction and testing the cavagnole game

After the transcription of the game rules, our archivist Kristof Selleslach also tested the game. And he suggested some improvements.

Reconstruction of the game According to the rules, Cavagnole is played with six players, although nine or twelve is also possible. Each player has twelve numbered “tableaus” or tiles, which they may arrange in three columns of four tiles of their choosing. The tableaus were beautifully illustrated in the eighteenth century. Each player may then distribute eight “tokens” or jetons across the tableaus, maximum one jeton per tableau.

Twelve numbered balls corresponding to the tableaus are hidden in a linen bag. A neutral hand then draws six balls one by one. After each draw, the score is calculated between the players according to the fixed division of points. If a player had a jeton on the tableau with the number drawn, all players owe a jeton to this player. If the jeton was in a double or quadruple position, the player wins two or four jetons from every other player respectively. The player with the most jetons after the sixth ball wins the game.

After the transcription of the game rules, our archivist Kristof tested the game. You don’t need much to play the game: A deck of cards, three dozen coins, a washcloth and 12 strips of paper will suffice. With one deck of cards, four players can take part, each taking a suit. The four kings are not used, the jacks are worth 11 points and the queens are worth 12 points. Using the playing cards, you arrange four different game boards on the table. With the first player, you simply place the cards in order from 1 to 12. With the other three players, you have a free hand and can randomly assemble the game boards. Then you arrange eight jetons on each game board. For example, choose the cards with the quadruple and the double points because you can win the most with them.  When everything is ready, a neutral person pulls the first number out of the washcloth.

You soon realise that not every player can stay in the game to the end before the sixth number is drawn. Players can often become bankrupt after two draws, sometimes even after the first draw. This is because of the excessive profit distribution after every draw. Any player unfortunate enough not to have placed a jeton on the number drawn can lose up to four jetons. As a result they lose half their capital. If other players also have a jeton on this number, the loss can increase further. In the worst case scenario, the player loses all their jetons after one draw and is forced to leave the game. 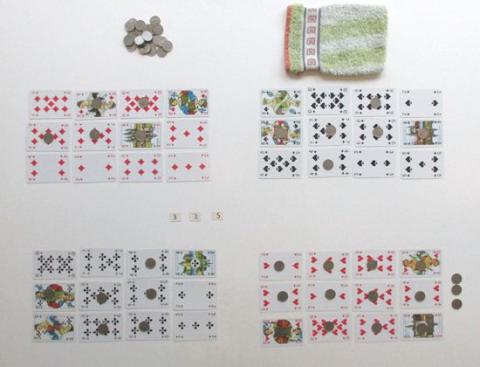 Suggestions from our archivist

Nobody likes to be sidelined after the first draw. This is why our archivist Kristof has some suggestions to improve the game rules. The quadruple points are toned down to triple points, and the upper and lower four-point tiles are reduced to double points. In addition, the profit distribution is only settled between the players sitting next to each other, and not with all the players at the table. With these adjustments, players can stay in the game longer, although not every player finishes.

Cavagnole can even provide a full evening of fun with the help of scoring based on the card game. After each round of six draws, the number of jetons each player has more or less than the eight jetons they had at the start of the round is recorded. For example, if a player has 11 jetons after one round, a score of +3 is recorded. If, on the other hand, a player only has 3 jetons left, a score of -5 is recorded. The average score across all players remains zero. What one player loses, another wins. Players with a positive score are winning, players with a negative score are losing. During the game, players want to try to get and stay with a positive points tally.