Earlier this year, the Plantin-Moretus Museum and the Hendrik Conscience Heritage Library (Antwerp) launched a fellowship programme for research into the history of the early printed book (15th-18th century) in Antwerp, with the gracious support of the Nottebohm Family Foundation and the Endowment Fund for Books and Literature. Today this scholarship is granted for the first time. Two foreign researchers will receive funding to visit Antwerp for a few weeks for research in the rich library collections.

In her research into the works of the English poet Edmund Spenser (c.1552-1599), Dr. Claire Eager (Colorado College, Colorado) noticed similarities with the work of the Southern Low Countries poet Jan van der Noot (c.1539-c.1595). Van der Noot was deeply involved with the way his books were produced, illustrated and distributed. He collaborated closely with illustrators such as Marcus Gheeraerdts and Lucas d’Heere, creating true artists’ books avant-la-lettre. Van de Noot probably hired the teenage Spenser to translate his Theatre oft toon-neel into English. Through Spenser, the works and the collaborative method of Jan van der Noot influenced the way poetry books were designed in seventeenth-century England.

Ashley Gonick asks the question who is responsible for tables in early modern books: authors, compositors or printers? What techniques were used to illustrate scientific publications? To answer these questions, she will be looking very closely at early printed books in the collections of Antwerp libraries, measuring tables and type to determine what technique was used. Research in the archives of the Officina Plantiniana will provide additional information regarding the wages paid for typesetting these complex books. 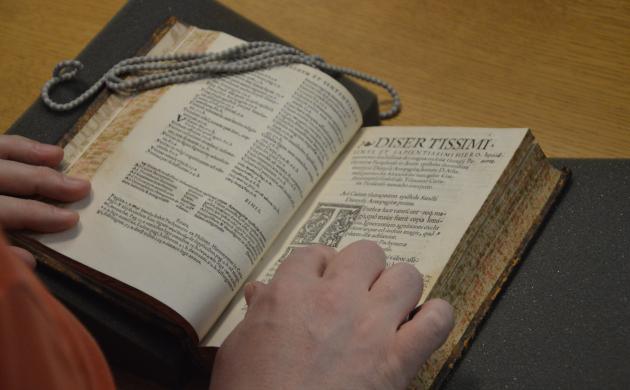 The Plantin-Moretus Museum and the Hendrik Conscience Heritage Library (Antwerp) are pleased to launch a new call for applications for our fellowship programme. We will award two travel grants for research into the history of the early printed book (15th-18th century) in Antwerp, with the gracious support of the Thierry and Frédéric Nottebohm Grant of the Nottebohm Family Foundation.