The Museum Plantin-Moretus has been internationally feted with two silver awards.

On 17 May, the presentation ceremony for the prestigious Museums + Heritage International Awards took place. The director of the Museum Plantin-Moretus, Iris Kockelbergh, was in London to receive a ‘Highly Commended’ award, equivalent to a silver.

The museum is proud to receive this international recognition for its own efforts and those of the city of Antwerp in recent years. The museum’s revamped design and its new storage depot and new reading room drew appreciation from the professional panel as an innovative and high-quality project.

For the European Design Awards, an independent panel of printers, publishers, journalists and academics evaluates the best examples of ‘communication design’ in Europe every year.

Kastaar, the Antwerp-based analogue printers’ collective consisting of graphic designers An Eisendrath and Stoffel Van den Bergh, and the Museum Plantin-Moretus were rewarded for their collaboration in connection with the museum’s reopening. Kastaar took Silver in the Miscellaneous Printed category. It was honoured for the creative efforts by which it generated interest in the printing trade in Antwerp.

Kastaar was given a six-month residency at the museum shop and the task of designing a merchandising line that reflected the essence of the museum. Its two members took their inspiration from the rich collection of sixteenth-century letters and wood blocks, interpreted the collection, and created and printed new products: postcards, coasters, seedbags, a never-ending calendar and so on.

To the general public, they became especially known for the bicycles they developed on behalf of the Museum Plantin-Moretus, with which they set out on a promotional tour to mark the reopening of the museum.

Previously, the collaboration between the Museum Plantin-Moretus and Kastaar had already gained the first Museum Shop award from the Flemish museum sector, in an initiative by FARO and ICOM-Flanders. 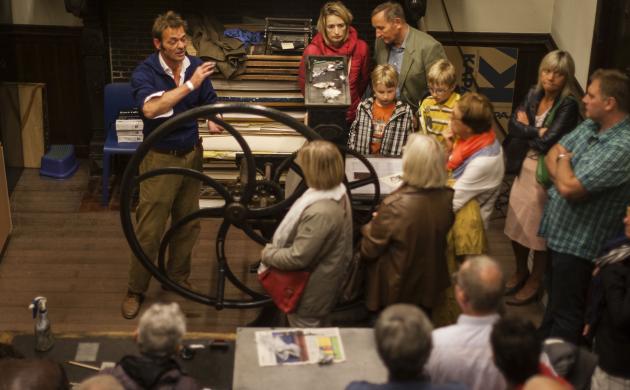 What is there to do?

Fancy an unusual adventure? Visit the world’s best preserved printing press and soak up the intimate atmosphere there. Young and old, type freaks and bookworms alike will all enjoy the guided tours, exhibitions and workshops here.

As a museum, we have the responsibility to prevent the spread of the coronavirus COVID-19. That’s why the museum will close temporarily and this until further notice. All our planned activities will be cancelled. The reading room will remain open.